The flight to Japan wasn’t as planned. It was 40 minutes delayed. I had to run through the Turkish Airport to catch the next flight. The second airplane was more comfortable than the first one. At least I could sleep.

As soon as I arrived in Osaka I waited 2 hours at the passport control office. Tatsuya was worried and called me to ask where I was. Unfortunately I gave him the wrong flight number, that’s why he ran from one gate to the other.

On the next day I realized that the taxis look rather old. I felt like travelling 30 years to the past. Maybe the taxis aren’t as old as they look…

The vehicle looks squared, has a long bonnet and a small sign on the roof. No, it isn’t a square with the letters “taxi” on it. It’s round or heart-shaped with a cloverleaf or another sign on it. I found the uniform of the taxi driver the weirdest of it all. They look like public officials or civil servants. Some of them even wear white gloves.

I visited the fox shrine at night….

Don’t visit the fox shrine at night, if you are scared of spiders. Visiting a place near a forest in the middle of the night is quite scary. Even the fox statues looked creepy. The spiders in Japan are bigger than in Switzerland. Tatsuya laughed at me when I had a small shock because of the spiders. It was a lot of fun and I hope to visit the fox shrine during day time, soon!

… and the Kiyomizu temple during the day.

Spending the first day together in Kyoto was a good choice. We visited a famous temple called Kiyomizu and walked through the park. We tried out fortune telling, which was fun!

There are sticks with numbers in a box with a small whole. Simply shake the box until one of the sticks drops out of the box and give the stick to the lady. She will give you a paper with your fortune written on it. If you don’t want it to come true, tie the paper to the bar. Try fortune telling just for fun!

According to the paper my future is pretty good. Honestly, I couldn’t understand it at all, so Tatsuya translated everything. I only remember one sentence: If you don’t have children by now, you will have children between 27 and 33. Tatsuya and I laughed out loud, when he read this part. 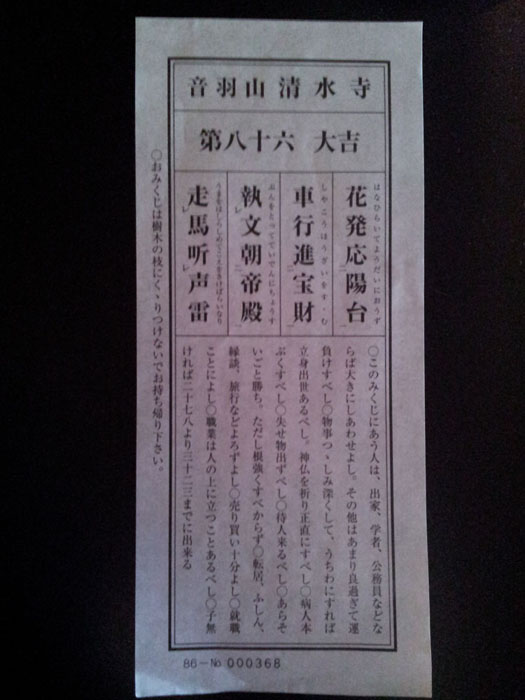 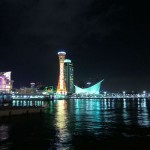 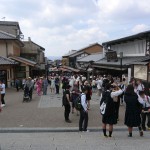